Friday 15 june 2012.
Location:  Talchikhel Lalitpur
NCE IT Fair 2012
Organized by: National College of Engineering Family.
The program was scheduled to ceremoniously started by 8 A.M. and almost I was also planned to be there at time, but due to some absurd condition arised, we(me and Hempal Dai) were arrived at 9:30and that was the just nearby of completion of formal session.  We were went there as a presenter of that 2 days fair, I had made my presentation in KTM-GTUG and hempal dai was in regular topic Foss Nepal and Licensing. One of the students of their Sanoj welcomed us and his friend Smriti covered details of us.
We planned to start visit the stall and went through stall and stall, as expectedly there we met our friends form KU representing Foss Nepal that made us more easy and cool. After having some snacks we moved toward the building, we first entered in Game Zone, everyone was busy with their competition setup. Competitors were ready for Fifa 12, Dota and CS.  After that we climbed for upper floor, Some guys were preparing for IT Quiz, some for 3D Movie show, and some for other stuff…. And Finally I reached in IT presentation floor. 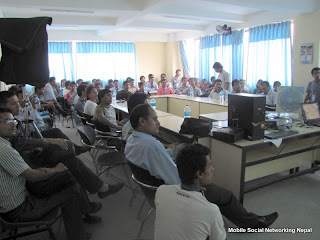 Presentation program was started at 12:30 with the presentation of Kailash Badu from Cloud Factory on Technology for Development. He explained the technology very clearly and cleverly and exampled the power of code …. He showed this technology can change the world. After that next presentation was quite interesting, presented by Madhav Adhikari, Treasure of Nepal GIS Society, He is experienced of 12 years in GIS, he was the first student of Geographical Study in Nepal. He explained about GIS system and the status in Nepal, he showed the value and importance of spatial data everywhere. Third presentation was by Nirajan Shrestha on Ecommerce, He was representative from Muncha.com,  He showed the change in online consumer and trend of online business. The forth presentation was on Mobile Social Network, that was presented by Prawesh Shrestha . He explored the role, impact and future of mobile development in world as well in Nepal he call everybody to join and take benefit from it.
After Prawesh, finally I got the time for presentation, I had chosen a topic as “Kathmandu GTUG (soon to re-branded as GDG - Kathmandu” I started by introducing GTUG and Google’s Developer Technology, I slightly focus on KTM-GTUG, it’s motivation and  it’s target. I mostly focus on next program including Google Developer Group Kathmandu, Google I/O and Google Apps Developer Challenge 2012. I requested them to join in out google group(www.groups.google.com/group/ktmgtug) and take a chance to participate in the program. And at last Pradeep Kandel from MIC Nepal lasted the first day session by Server Virtualization.

What I observed there was that program was 5 rated from my side, Those people were done their job very cleanly even we didn’t feel it was first one.  While having refreshments in canteen, we got the chance to talk with Head of Department (actually I forgot name…………. .hm may be Rajendra Adhikari) I felt how much college and administration was supporting their student and program as well. This is an example for other student and other college for doing something special and something great.